Victoria Cross recipients of Wimbledon College and the Army Class 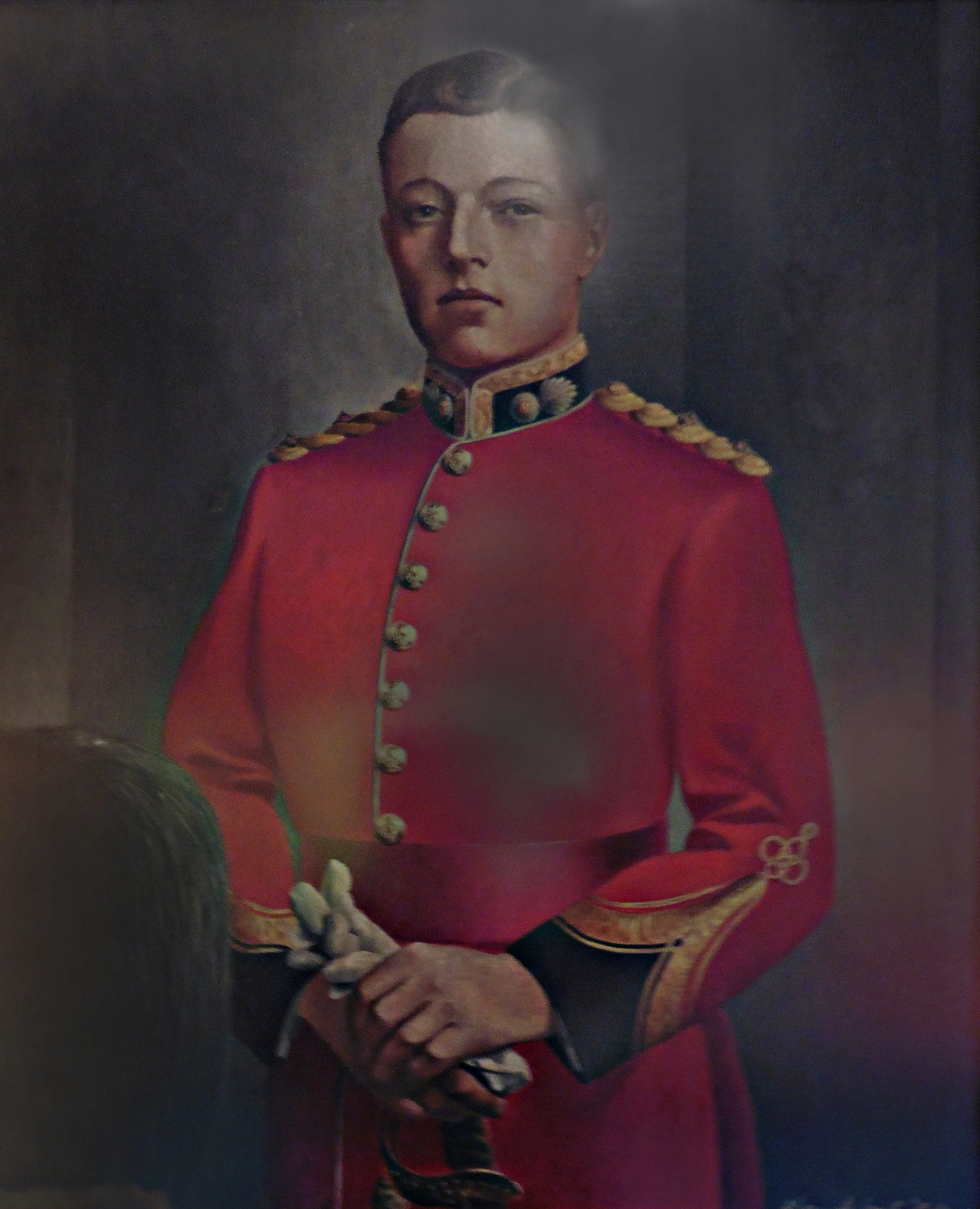 Maurice James Dease was born in 1889 in County West Meath in Ireland.  He attended Stonyhurst College and Wimbledon College Army Class before the First World War.   Lieutenant Dease was commissioned in the 4th Battalion Royal Fusiliers.

On 4th August 1914, Britain declared war on Germany and within a few weeks the British Expeditionary Force (BEF) was in northern France to hold back the German advance through Belgium. The Battle of Mons (August 1914) was the first encounter between the BEF under Sir John French and the German army commanded by General von Kluck.

The Victoria Cross citation records: “On 23rd August 1914 at Mons, Belgium, Nimy Bridge was being defended by a single company of Royal Fusiliers and a machine gun section with Lieutenant Dease in command.  The gunfire was intense, and the casualties were heavy, but the Lieutenant went on firing in spite of his wounds, until he was hit for the 5th time and was carried away to a place of safety where he died.  A private (S F Godley) of the same Battalion who had been assisting the Lieutenant while he was still able to operate the guns, took over, and alone he used the gun to such a good effect that he covered the retreat of his comrades.”

Lieutenant Dease is commemorated on the Memorial at St Synmphorien Military Cemetery, Belgium.  He is mentioned on a plaque on Nimy Bridge and also in Westminster Cathedral.  His name is recorded on the War Memorial in the Wimbledon College Chapel.  He is also immortalized in a 1958 edition of the Eagle Comic.

Lieutenant Dease was the first person to be decorated with the Victoria Cross in the First World War. 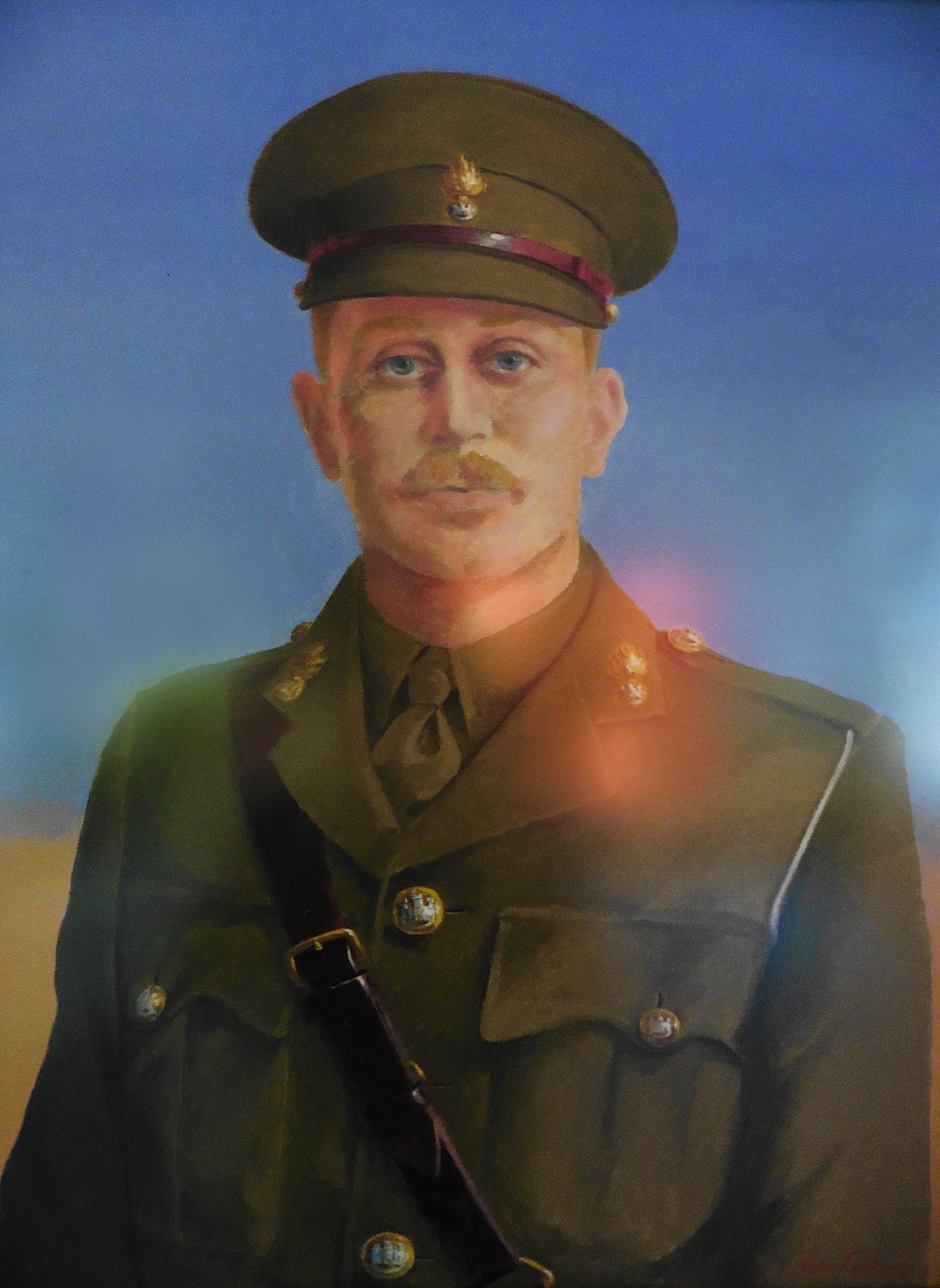 Gerald Robert O’Sullivan was born in County Cork in 1888 and became a pupil at Wimbledon College in 1899.  At 17, he went to the Royal Military College Sandhurst, joining the 1st Battalion Royal Inniskilling Fusiliers, and served in China during the 1911 revolution and later in India. Captain O’Sullivan was sent to the Dardanelles as part of the campaign to defeat Turkey, an ally of Germany, in April 1915.

In June 1915, Captain O’Sullivan took part in an action that resulted in his being wounded in the leg and recommended for the Victoria Cross (which was not awarded on this occasion).   He spent time in hospital in Egypt and after a rapid recovery was sent back to Gallipoli.

On the night of 1st July 1915, south-west of Krithia, Captain O’Sullivan led a party of bomb-throwers on a night-time raid to recapture a section of trench.  He advanced into open ground under heavy fire to deliver his bombs with more effect.  He mounted the parapet of the trench and was severely wounded.  O’Sullivan’s inspiring example encouraged his men to make further efforts, resulting in the recapture of the trench.  For this action he was awarded the Victoria Cross.

Captain O'Sullivan was killed six weeks later in a charge he led up Hill 70 in the Big Push at Suvla Bay, Gallipoli.  The position was later retaken by the Turks and Captain O'Sullivan's remains were not recovered.

Captain Gerald O’Sullivan is commemorated on the Helles Memorial at Gallipoli.  His name is recorded on the War Memorial in Wimbledon College Chapel.

Killed in Action in the Straits of Dover 12th  February 1942

Eugene Esmonde was born with a twin brother in 1909, in a family of eight brothers and three sisters.  He was a pupil at Wimbledon College in the 1920s.  His great uncle, Thomas Esmonde, was awarded the Victoria Cross for his courage during the Crimean war, in 1855.

Esmonde enlisted in the Royal Air Force in 1928 and subsequently flew for Imperial Airways in the early days of commercial flight. He joined the Fleet Air Arm in May 1939 with the rank of Lieutenant Commander, surviving the sinking of HMS Courageous in September that year.

During the Battle of the Atlantic, the German battleship Bismarck proved a great threat to Allied shipping, sinking many merchantmen as well as the battleship HMS Hood (the largest warship of its day).  Prime Minister Churchill ordered the destruction of the Bismarck.  On 21 st  May 1941, Esmonde twice led his squadron of Swordfish (a bi-plane with a torpedo slung underneath) from HMS Ark Royal against the Bismarck.  On the second occasion the Bismarck’s rudder was damaged and the ship could not escape pursuing British warships, leading to the Bismarck’s destruction five days later.  For his part in the attack, Esmonde was awarded the Distinguished Service Order (DSO).

In February 1942, the German warships, Scharnhorst, Gneisenau and Prinz Eugen, escorted by many smaller ships and protected by air cover, planned to sail from northern France through the English Channel to their German home port.  825 Squadron, commanded by Esmonde, had been sent to RAF Manston, Kent, in anticipation of this move by the German Navy.  Esmonde’s orders were to attack the convoy before it got beyond Calais.

On 12th February, after the fleet was spotted in the English Channel, Esmonde and six Swordfish took off from Manston at 1225 hrs, and circled over Ramsgate waiting for the escort of five squadrons of Spitfires they had been promised.  Only 10 Spitfires, from no. 72 Squadron, appeared.  Fearing that if he waited any longer, the German battle fleet would be out of range, Esmonde pressed on.  825 Squadron was hopelessly outmatched.

The German Battle Fleet had 400 aircraft assigned to it, with over 100 in the air at any one time, including the potent Focke Wulf 190.  As Esmonde made for the cruiser Prinz Eugen, a shell burst in front of Esmonde's plane, blowing off his lower port wing. Esmonde desperately pulled up the nose of the Swordfish, releasing the torpedo, but a direct hit destroyed the plane.

The German battlecruisers got through in what became known as the Channel Dash.  All six Swordfish were lost, and only 5 out of the 18 airmen who left Manston survived.

For his courage and leadership, Lieutenant Commander Eugene Esmonde was awarded posthumously the Victoria Cross. He is commemorated on the Memorial at Woodlands Cemetery Gillingham and the Royal Navy Memorial Portsmouth.  His name is listed in Wimbledon College Chapel.